In part two of Ricky O'Donnell's weekly review of all things Chicago Bears, we give praise to cool athletes like Cam Newton, update you on vital "Dancing With The Stars" news, and embed an early-period Bright Eyes song for no reason in particular.

Hey! If you missed the first half of my weekly Bears critique, be sure to correct that problem immediately.

1. At this point, most Bears fans have probably already heard enough about the inherent greatness of Cam Newton. Carolina's 22-year old rookie QB has caused league-wide destruction to begin his NFL career, and the Bears' defense just became his latest victim. Newton threw for 374 and scored three touchdowns (two rushing, one passing) against Chicago, and, most revelatory, did it with the type of ease typically reserved for action stars and folk heroes.

Still, Newton is largely seen as an enemy, and not just to sports fans cheering for teams who have personally experienced his signature blend of carnage. As you surely have heard by now, Newton's role as an antihero was forever cast after he accepted money to play college football a season ago, and somehow got away with it. He would then proceed to turn in a highlight-crazy, Heisman-winning, certifiably superhuman campaign during his one season as a quote-unquote amateur starting quarterback at Auburn.

Newton's performance against the Bears on Sunday and the way he's been treated by the public as a whole during his rookie season reminded me of one of my favorite quotes from maybe my favorite sportswriter. Deadspin's Tommy Craggs, drop some knowledge.

"We've created this horribly misshapen world in which we lionize authoritarian scolds like John Wooden and Tony Dungy and vilify physical geniuses like LeBron and A-Rod and Barry Bonds, simply because they don't outwardly conform to whatever values we're pretending to believe in at the moment," Craggs says. "It's sports. It's competitive exercise. It ain't church. I like sportswriting that throws a brick through stained glass."

A-fucking-men, brother. If you ever wondered why Michael Vick, Rajon Rondo, Alex Ovechkin, and, yes, Cam Newton, are all TUP heroes, now you know.

2. The Chicago Tribune is one of the most tenured and credible print journalism machines in this country's history. Last week, it ran a story on Jay Cutler tweeting "Good luck babe" to his former finance Kristin Cavallari as she prepared for "Dancing With the Stars". NEWSWORTHY. Where does this story turn from here?

Yeah, that's Cutler live and in-studio supporting his former girl, looking like he just got out of his Michigan Avenue Magazine photo shoot. Proof: 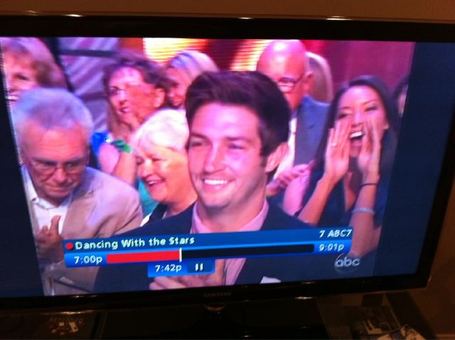 People Magazine brings us the deets:

Cutler grinned broadly and clapped his hands as Cavallari and pro partner Mark Ballas did an upbeat and sultry samba to "Crazy in Love" by Beyoncé, earning 24 points from the judges.

KA 6 minutes ago
He needs to focus on football!

President throwing out the first pitch at a baseball game? Why isn't he fixing the economy!
Humans, man.

3. Congrats to Bears backup running back Marion Barber for creating the best .gif of Week 4 with his failed backflip touchdown celebration during the fourth quarter against Carolina on Sunday. Click the pic.

The best college football .gif of the weekend came from our part of the universe too, when a miscellaneous Illini player kneed a vague Northwestern player below the belt on Saturday. Good work, Illinois state football. Way to keep your .gif game locked tight.

4. Pitchfork's Ian Cohen is one of my favorite music writers, and recently he dropped a sentence in a "Madden '12" review for Kill Screen Mag that made me furious I didn't write it first.

While it’s nice to realize that similarly rated quarterbacks are prone to hot-and-cold streaks, when Jay Cutler’s game starts to noticeably slip it’s exaggerated to the point of being a symptom of clinical depression: the game might as well show him drunkenly listening to Fevers and Mirrors while staring at a Kristin Cavallari photo spread from a 2008 issue of Us Weekly.

Love you forever, "Fevers and Mirrors".

The one where we'll follow the on-going's of Bears legend Rex Grossman as he tries to rebuild his career in Washington.

The former TUP hero is off to a 3-1 start in Washington. During a victory over the winless Rams on Sunday, Grossman went 15-of-29 for 143 yards with a touchdown and two inceptions. That's good for a 48.5 passer rating and 4.9 yards per throw. Pretty crappy, but you can't argue with a win. Bring on the Good Rex picture. 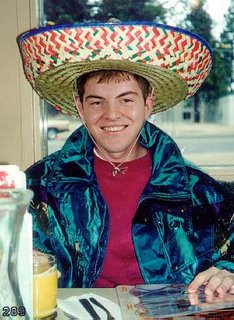