In part two of Ricky O'Donnell's weekly review of all things Chicago Bears, we defend Jeff Pearlman's new book on Walter Payton, endorse @NotJayCutler, and put all those false starts on Monday night in historical perspective.

Hey! If you missed the first half of my weekly Bears critique, be sure to correct that problem immediately.

1. There isn't a sports team in this city's history as revered as the 1985 Chicago Bears. Jordan's Bulls were able to sustain dominance for six times as long, but they belonged to the entire world. The '85 Bears were pure Chicago. It's the reason former members of the team won't be filing to collect unemployment anytime soon. Even 25 years later, the '85 Bears remain omnipresent: they can be seen all over the media, continue to get local endorsements, and even some national commercials. Forget deep dish pizza or towering skyscrapers: if it were up to Chicagoans, outsiders would affiliate us with the '85 Bears first and foremost.

You can imagine then that a book taking down that team's best and most beloved player would come under fire locally. Jeff Pearlman has caused just that. The guy best known for writing that other Barry Bonds book has now turned his attention to Walter Payton and the not-so-sweet retirement life of the NFL's second all-time leading rusher.

Payton is a folk hero in this town: for all of his greatness as a player, he was sold as an equally great person. In Pearlman's new book "Sweetness: The Enigmatic Life of Walter Payton", the author assesses Payton was addicted to prescription drugs, abused laughing gas, and had a mistress. A few of Payton's former teammates and colleagues have rushed to the deceased running back's defense, most notably his former coach, Mike Ditka. Ditka stated he would "spit" on Pearlman.

"If you're going to wait 12 years after somebody's passed, come on. This is the sign of a gutless individual who would do this. Totally gutless who would hide behind that, and that's what he's done."

I assume this is the point of view taken by many who lived and died with the '85 Bears and still hold them dear to this day. But anyone discrediting Pearlman's book without reading it is choosing to ignore an enlightening and humanizing take on the franchise's most esteemed player.

Besides: is "Famous Athlete Does Drugs, Cheats On Wife" really that startling of a headline?

Athletes, particularly ones with as much character as Walter Payton, are too often built up as religious figures rather than normal human beings with problems like everyone else. If you want to accept the childhood storybook narrative of Walter Payton, fine. Just know that you're willingly missing out on a big piece of the story.

2. Football is thought of as the toughest, most masculine American sport, but at its worst it can be ungraceful and sometimes even downright cringe-worthy. The Bears specialized in the latter on Monday against the Lions. The game was plagued by a penalties, sloppy play and misused timeouts and challenges. From the Tribune's Brad Biggs comes the official word on all those false starts by the Bears' offensive line.

2. The Associated Press has credited Stats LLC with a juicy statistical nugget: The six false starts by the Bears in the first half set an NFL record. That comes a year after the offense set an NFL mark with nine sacks allowed in the first half of a loss at the Giants. At least Jay Cutler wasn’t getting creamed on these plays.

3. If you've ever dreamed of hearing Jay Cutler talk about 'fun pocket squares' while wearing salmon pants, you're in luck. ESPN's E:60 featured the Bears' warrior quarterback shopping and trying on a variety of suits at upscale New York boutiques.

4. I would assume if you have the dexterity to find this column, you're probably already familiar with Deadspin writer Drew Magary. Magary is the author of the new novel "The Postmortal" and has been writing weekly NFL columns for Deadspin since 2007. Magary is also the man behind @NotJayCutler, a profane and hilarious Twitter account mocking the Bears starting QB. Here's a sample of Not Jay during Monday night's disaster against Detroit. 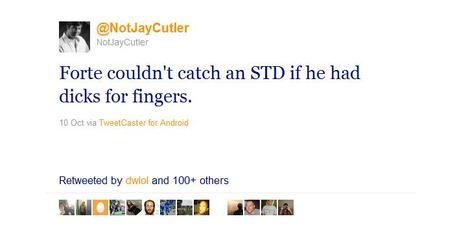 What, we're all adults here.

Drew just emailed me (!) and said: "I'm not behind the fake Cutler Twitter, much as I enjoy being a glory hog." Whoops. You should still follow anyway.

5. No Grossman section this week because Washington had a bye. Instead, let's end on an uplifting note. Again, from Brad Biggs:

The Bears are 2-3. The leaders for the sixth and final playoff spot in the conference are 3-2. For as discouraging as Monday night was, this season is far from over.