Share All sharing options for: The Option-Run Is Evil, Wondrous, Scary, Frank And Magical: Recapping Notre Dame Vs. Air Force

Two themes really were present during this game as I sat on my couch, ignoring 80 degree weather in October:

1) Against mediocre defenses, the Irish will destroy. They have too much talent at the skill positions and a line far too experienced to get beat by an undersized attack. Also, Tommy Rees may (I really want to emphasize the "may" part) have this turnover thing kicked.

2) Despite bringing in Ed Warinner* -- a former Air Force and Army offensive line coach -- to stop the option-run, Notre Dame still has a very hard time stopping the option-run. The Navy game, once again, and sadly, looms large.

*To Warinner's credit, he also runs the offensive line and they have been nothing short of outstanding.

Author's Note: This week's recap will be more notes-y than my typical pseudo-organized stream of conscience recap of games. Cool? Sweet.

Lets do this again, to show how quickly this game was over: 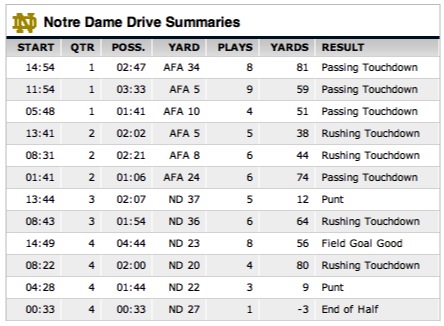 Yeah, yikes. Notre Dame didn't comprehend punting until the second half. It was 42-16 at half. There were 1,225 combined yards in the game. Somehow, Air Force had five more than Notre Dame. Weird, wild stuff.

-The last two weeks have almost made me long for those close games where the outcome is in question until the final snap of the ball. That is until I look back at Michigan this year and MSU last year and realize the Irish only lose those types of games. So, yeah, blowouts are totally cool.

-The option-run has haunted the Irish in recent years and it seems like it will again in 2011. Navy scares me. I know I shouldn't be. But, jeez, Navy, stop beating the Irish. My headline, "The Option Run Is Evil, Wondrous, Scary, Frank and Magical" is exactly how I feel about it. Teams know pretty much what is going to happen every snap. Yet, like the Irish, they cannot stop it. Man, Navy scares me.

-Cierre Wood is now my favorite Irish player of all-time. Yes, casual sports fan, even more than Rudy. Just look at that mohawk/black-framed-nerd-glasses combo. So cool. 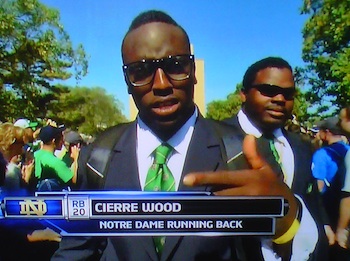 It is now my desktop picture.

-Andrew Hendrix is white. Very white. But he can run and, like, throw, too. As long as he doesn't trip on the 10-yardline, he should be a nice change-of-pace QB for the Irish.

Super awesome emoticon on how I felt after this game and shit...

Author's Note: Miami (OH) finally won a game! Lets see if they can be the only team in the history of college football to lose ten games, win ten the next and then lose ten once again. Go, my alma mater.