A Tribute To The Bobblehead

Have you ever received a bobblehead at a sports event? Here are some of the more unusual, interesting and offbeat examples of this collectible genre.

Share All sharing options for: A Tribute To The Bobblehead

Many sports teams give away, as a promotional item to entice fans to buy tickets to a particular game, a small doll depicting a figure that in some way is important to the team or fan base. The head of these dolls are attached by springs that make them "bobble" when you push them, thus the name "bobblehead". If you are so inclined, you can even have one made of yourself; that's just one of many websites that now sell personalized bobbleheads.

Bobbleheads have become one of the most popular of promotional giveaways, and this post was prompted by the fellow whose head you see at the top of this article. I'll save the best for last by telling his story after all the others here.

Herewith an appreciation of the humble bobblehead.

Dottie Key was a member of the Rockford Peaches of the All-American Girls Professional Baseball League and, according to this article:

was said to have been the basis for the character Mae (All the Way) Mordabito that Madonna played in the 1992 movie, "A League of Their Own." She had also been part of a Ken Burns project on the women's baseball league.

This bobblehead was given out at a tribute to the AAGPBL night by the Rockford Riverhawks in 2002; Dottie Key signed autographs that night and was genuinely appreciative that she and the AAGPBL were being remembered six decades after they played. She passed away in 2003. 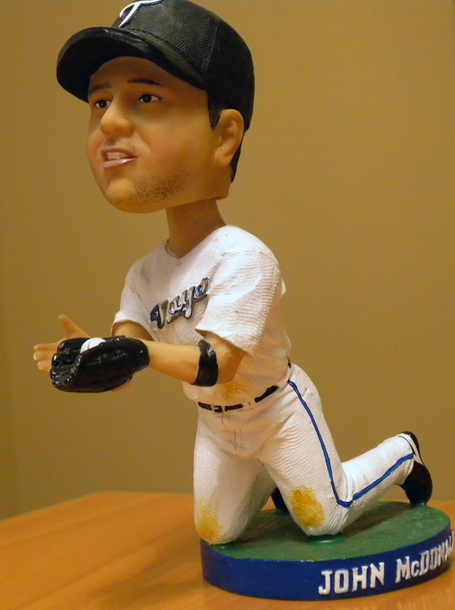 John McDonald has been a major league infielder for 12 seasons, the last five with the Blue Jays. I received this bobblehead in 2008 when I saw the Cubs play in Toronto. He looks like he's praying. I suppose you have to do a lot of that when you play in a division with the Yankees, Red Sox and Rays. And yes, that is stubble on his chin -- I suppose, for the "gritty" and "scrappy" nature of a player who has a .239 lifetime BA and .605 career OPS. 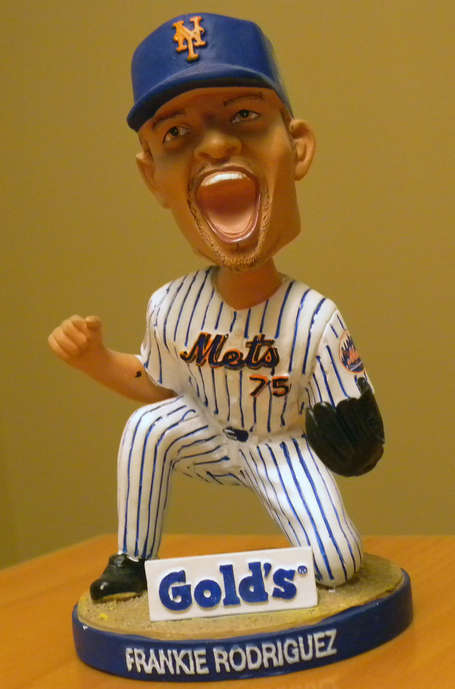 This bobblehead of Mets closer Francisco Rodriguez ("Frankie" on the base, as if New Yorkers wouldn't accept him if he were called "Francisco") was given away at a Mets/Cubs game last year. He looks like a crazed madman. Could they have been predicting future events? 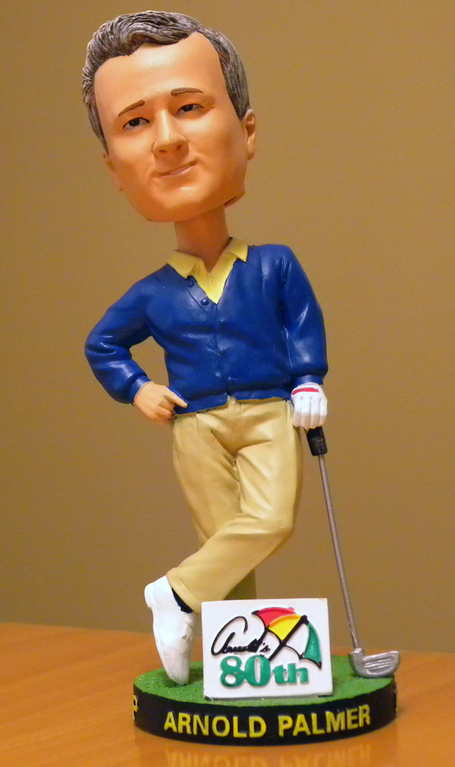 In September 2009, on the occasion of golf great Arnold Palmer's 80th birthday, the Pirates celebrated by giving out this attractive bobblehead of Arnie, who attended the ceremony. Attendance was 17,862 -- the largest of the three-game series between the Pirates and Cubs. 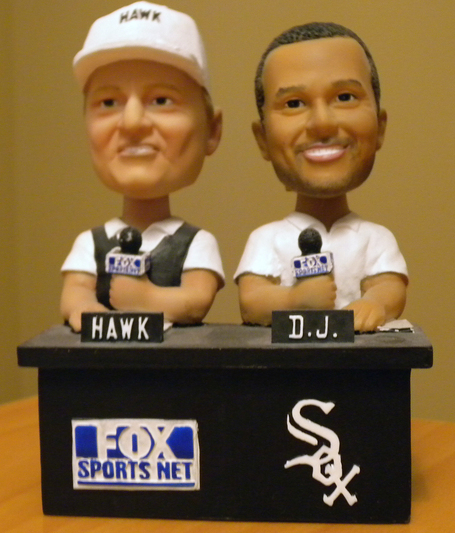 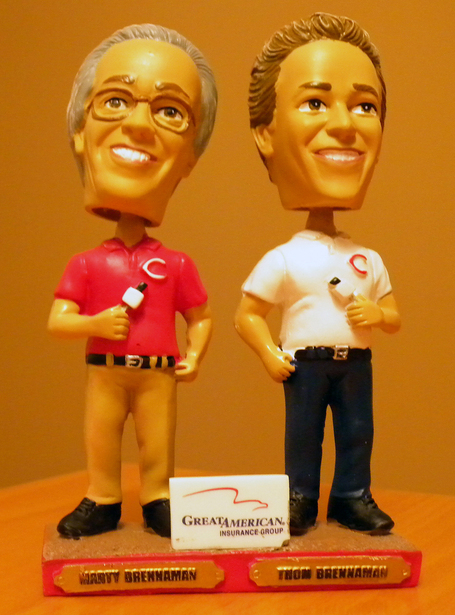 For some inexplicable reason, both the White Sox and Reds thought it would be.. um, interesting, to give out bobbleheads of their broadcast team. I really can't say anything more about these other than they are oddly unsettling. Especially the Brennamans. 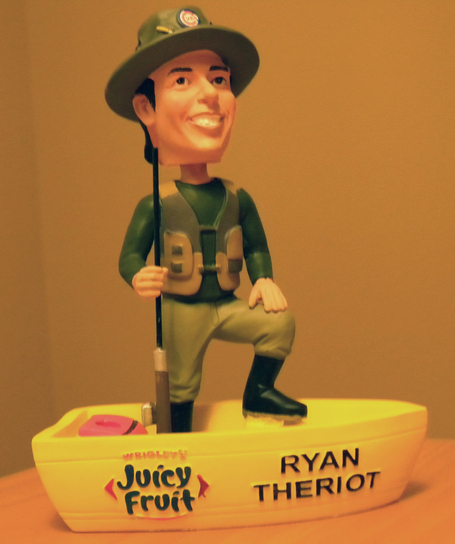 This season, the Cubs decided to make things a bit more personal with their bobbleheads, giving out a pair of dolls depicting Cubs players doing something they might do in the offseason. Ryan Theriot (whose scruffy looking facial hair wasn't included in his likeness) enjoys fishing in the offseason -- but he was traded away within two months of this bobblehead being handed out in mid-June. The fish surely won't care. The other Cubs "offseason" bobblehead was Carlos Zambrano pictured playing soccer... it was almost too silly to post a photo; I'll just tell you that the face looked more like Nomar Garciaparra than Big Z.

Finally, on the last day of their 2010 season on Labor Day weekend, the Triple-A Iowa Cubs handed out what might be the ultimate bobblehead, "The Player To Be Named Later."

A perfect tribute to baseball transactions everywhere, "PTBNL" has as generic a face as you could possibly imagine, although this bobblehead technically isn't a "Player TO BE Named Later; he's actually "Player WHO IS Named Later." Perhaps someday someone actually named "Later" (and yes, there are people with that surname, including nine with listed phone numbers in the Chicago area alone) will play major league baseball.

Until then... enjoy his bobblehead, and any of these giveaways you receive; they're among the best of team promotional items.