Dwyane Wade Talks To SB Nation: On Chicago, Obama And Making A Difference

In advance of Dwyane Wade's fourth annual Wade's World Weekend taking place in Chicago over the next few days, SB Nation got the chance to talk to the Miami Heat superstar about Chicago, his visit with President Obama and more.

Share All sharing options for: Dwyane Wade Talks To SB Nation: On Chicago, Obama And Making A Difference

"To whom much is given, much is required, and I've been given a lot in this world."

Dwyane Wade is talking about his philosophy in life, and it rings truer than most of the cliches we hear from athletes these days. Because with Wade, his actions say as much as any of his words. This weekend, his Chicago-based Wade's World Foundation will host its annual Wade's World Weekend, a series of charity events designed to reach out to disadvantaged Chicago youths. "To let them know that there's a bigger world out there," as Wade explains it.

I had a chance to talk to Wade in advance of the event, and the exchange proved a lot of what I already assumed. There's been a lot of criticism thrown at the Miami Heat this summer, but even amidst a chorus of outcries, you haven't heard many people question Wade's role in the whole affair. Some say he toyed with the Bulls this summer, sure. And yeah, there was that little 9/11 dustup a few weeks ago.

But for the most part, Wade's come through this unscathed. He was loyal and knew he wanted to stay in Miami, so he recruited his friends to play with him. Where's the crime in that?

If we're looking for a villain to epitomize the Miami Heat, Dwyane Wade simply doesn't fit the bill. 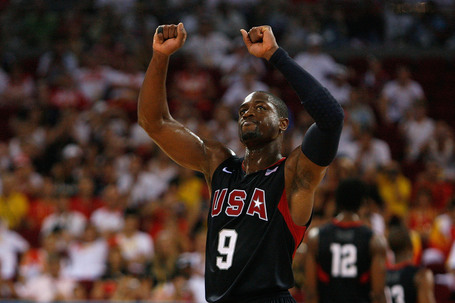 Basketball's taken him all around the world and brought him to places that most kids from Chicago could never imagine. A week ago, he was playing basketball with President Obama. "I was on his team, actually," Wade said. "It was just a great, great experience. We enjoyed ourselves. It was real cool. One of those monumental moments."

Isn't it great to have a basketball fan in the White House? "Love it," Wade laughed.

It's one of those surreal perks of Wade's enormous fame and success that sort of defies our comprehension. What would it be like to run and a pick-and-roll with the most powerful man in the world? Wade's one of the few people who can answer that question with authority. But to whom much is given ...

"One thing we try to do is identify the people in the community that are doing positive things [and] donate to them, so they can give back to the kids." Wade's talking about his foundation now, and the goals he still has for himself and the city of Chicago. "I eventually want my own program, my own youth center. But until we get our own building, for now, we're giving back to the Ceasefires, and Stop the Violence, and youth centers of Chicago."

And as celebration of those efforts — and a promotion that grows every year — Wade's World Weekend does a lot to bring together the people out there looking to make a change in the city. But it's not your typical charity weekend.

Wade's favorite part of the weekend: "The whole day of Saturday, on Aug. 21. We start off the day with the Wayne's World youth summit. I have a lot friends in the business world doing positive things that come out, and we try to talk about the major issues going on in Chicago. And we give them an opportunity to talk back to us, and let us hear their voice."

The idea is to "talk to them about some of the problems they face in Chicago. To really sit and listen. To try give them a different perspective, and let them know that someone believes in them." 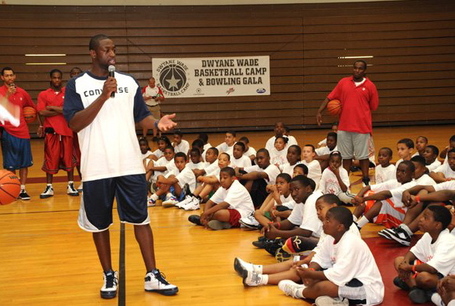 "We try to keep it real with the kids," Wade explained. "I'm going to tell things about me personally that other people probably don't know, just because I want them to open up to us. That's the only way we can get to the root of the problem, if they open up about what's personal to them. So I let 'em know  exactly what it took for me to get here. And the things that drive me to stay here, and go forward."

What did it take for Wade to get where he is? People. A lot of influential people.

"No one gets to where they want to be without somebody helping them," he said. "There's a monumental person every step of the way." And even if Wade's NBA career keeps him from making a difference on a daily basis, his foundation makes sure to help fund the people and organizations that do. People that can take an active role in keeping young people on the right track. People that care. And, in many ways, the same people that helped make Wade who he is.

How does a city change? With someone like Wade pushing from the top, making sure the people at the bottom are pushed the same way he was. Chicago is dealing with dangerous gang problems, and the persistent challenge of providing effective public education. Wade may not be able solve all of that, but just for trying, he's one of the good guys in this fight.

"Because I'm not wearing a Bulls jersey, people get confused at times," Wade said with a laugh. "But this isn't about what jersey I wear. I love the city of Chicago, and I think I've proven that over the years. My foundation started here, it's still here, and it always will be.

"It's about the city that I grew up in, walking the streets. And wanting to make it a better place. We're all only one person, but if we all team up, we can make a huge difference."

And that's the bottom line here. Just like what we said at the beginning — it's hard to be cynical toward Wade. What he's doing is bringing people together to try and make a difference. It sounds cliche, but Wade's actions speak louder than any mission statement. He raised $800,000 for Haiti immediately following the January earthquake. In 2008, after a woman named Dawn Smith had her house burned down, Wade stepped in and bought her a house. And year-by-year, the Wade's World Foundation gets stronger and stronger.

It was funny to talk about all this now, because Wade's about to become a centerpiece on one of the most hated teams in sports history. But at the end of the day, don't let that confuse you. Wade's one of the good guys, for the youth Chicago and beyond.

Really, for anyone trying to make a difference, Dwyane Wade's a pretty impressive example.

"I'm only 28 years old," Wade reminds us. "There's more and more I have to continue to do. It never stops. You never get to stop working."

For more information on the events in Chicago this weekend, click here.