Are You Ready For Some Fantasy Football? A Bears Preview

SBN Chicago takes a look at the 2010 fantasy football prospects for members of the Bears.

Share All sharing options for: Are You Ready For Some Fantasy Football? A Bears Preview

As the days of July slowly wane into August a change starts to emerge in the local sports talk. Instead of talking about overpaid NBA stars or errors on the base paths, words turn to the gridiron and the sport that animates every crisp autumn weekend. College ball is right around the corner, and many of the NFL training camps are already underway. As we get closer to the start of those seasons we'll have many articles on the local teams of the Big Ten and the Bears. To kick things off, we here at SBN Chicago present a slightly different take on the traditional upcoming season profile.

In what we hope to make a new tradition here for all Chicago sports, we've partnered with the SBN blog, Fake Teams, to present a fantasy football profile of the 2010-2011 Chicago Bears. Despite major changes at quarterback heading into the 2009 season, the Bears were a colossal disappointment for both casual fans and fantasy managers. A new season brings more changes, most notably the installation of Mike Martz as offensive coordinator. The Bears also made a high profile acquisition on the defensive side of the ball, signing free agent and five-time pro bowl defensive end Julius Peppers to anchor the line. Below you'll find a fantasy outlook for many major returning players as well as some of the new Bears faces. Joining us today for the analysis is guest writer, from Fake Teams and MLB Fantasy Prospects, Evan Levine. 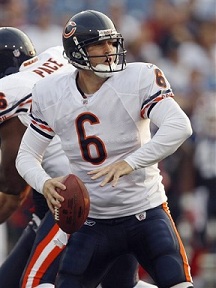 Many wouldn't have believed that Cutler could set franchise records in his first season with the Chicago Bears, but he did just that, airing it out for franchise highs of 555 passing attempts and 336 completions. With Mike Martz installed as the offensive coordinator, fantasy owners can expect Cutler to air it out even more. While he should surpass his 27 touchdown from last year as well as his 3,666 yards, his 26 interception total from last season will likely go up as well. The Bears still lack an offensive line, which means Cutler will be on his backside more often than not, leading to errant throws and the ball going the other way.

I look at Cutler as a low end starter in deep leagues, and a solid backup in shallow leagues because of the pass friendly offense he will be in. As Offensive Coordinator of the Lions, Martz brought the best out of John Kitna, throwing for 4,028 in 2006 and 4,068 yards in 2007. If Martz can do that for Kitna, just imagine the gaudy numbers Cutler in his prime may be able to put up. 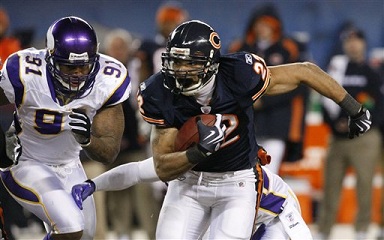 Many were disappointed with Cutler's performance last season, but Forte takes the cake as biggest fantasy bust of 2009. Forte was a unanimous top four pick coming off a rookie season where he ran for 1,238 yards, caught 63 passes, and scored 12 touchdowns.  In 2010 Forte took a step back failing to rush for 1,000 yards, while only exceeding 10 points or more seven times in regular fantasy scoring formats.

The Bears had so many problems on the offensive line last season that Forte wasn't given ample room to break through holes. With the Bears playing from behind so often, the offensive game plan frequently became pass first, run almost never.  Only totaling over 100 yards in six games last season, many fantasy managers will be hesitant to take Forte, especially with the addition of Chester Taylor who will be used as more than just a third down back.

Because of last season, most people look at Forte as a low end number two running back or a solid flex option dropping him to the fifth or sixth round. This fall in draft position has many labeling Forte as a fantasy sleeper, but I strongly disagree. The signing of Taylor will cut into Forte's production. While I don't expect an even split, Forte may barely exceed 200 carries. Forte might be a starting running back, but he is a bottom tier starter because of the lack of offensive line, and the overall teams strategy to put points on the board. 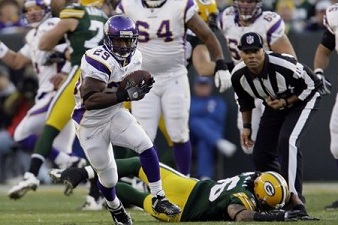 With my low expectations for Forte, owning Taylor is a necessity. Oddly enough, Taylor has the same exact intangibles as Forte. They both have good speed, both are good in between the tackles, and both are dual threats because of their excellent hands.

I don't mean to throw Forte under the bus with my praise of Taylor, but I believe that General Manager Jerry Angelo has lost faith in Forte and that Taylor will have every chance to win the starting job. I think Head Coach Lovie Smith will ride the hot hand which should increase Taylor's value.

Because Taylor has been the backup to Adrian Peterson, he hasn't surpassed 400 yards the last two seasons. After all, if you had Peterson, would you really hand the ball off to Taylor? As a backup running back on the Bears, however, Taylor will see tons of action. You can even expect to see Taylor in the backfield with Forte as Martz loves to utilize his running backs in the passing game. Taylor will be selected between the eight and tenth rounds in standard drafts, but for those who also grab Forte I would take him a round earlier as an insurance policy. 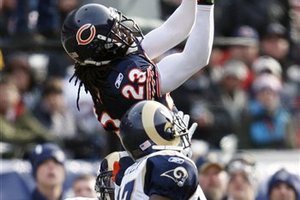 Since Coach Smith has been in Chicago, he's had faith that Devin Hester can be a number one caliber receiver in the league. Hester has taken great strides the last two seasons, going from 52 receptions and 665 yards in 2008 to 60 receptions and 757 yards in 2009. Hester doesn't have any eye for the end zone, though, totaling 6 TDs the last two seasons. However, he has had at least 70 yards in nine games last season, which made him the Bears' most consistent receiver.

Hester will likely be a big part of the Bears offense, but maybe not in the way fantasy owners would like. Rumors are that Hester will be used in the return game more often in 2010, so he will not be lining up as a receiver quite as often as in 2009. On the other hand, there have been reports that Hester will be used as a slot receiver. This would have him matched up against third string corner backs and linebackers who won't be able to keep up with his blazing speed. I think both rumored scenarios will happen, but that Hester won't see more then 10 snaps a game on offense, which brings his value down in leagues that don't count return yards. 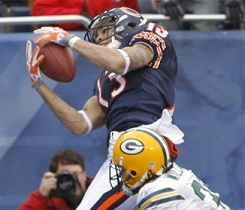 Maybe the biggest surprise of the Bears 2009 season was the emergence of Johnny Knox. A fifth round pick out of Division II Abilene-Christian, Knox finished the season with 527 receiving yards and five touchdowns. Like most Bears receivers, however, Knox was consistently inconsistent, as Cutler spread the ball around the field.

Coming into 2010, Knox might not be Cutler's favorite receiver, but he's easily Martz's, as he's big play threat whenever he goes deep. The problem for Knox is that he is not very physical so bigger corners can bully him. His counter is to rely on his quickness and his great hands. In shallow leagues, Knox will go probably undrafted, but in deeper mixed leagues Knox is a solid number five receiver for your team. He screams upside, but should not be relied on from a week to week basis until he can show it on the field. 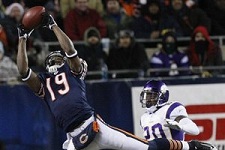 Considered a breakout candidate in many circles, Devin Aromashodu may have the most upside of any Bears WR. In his last four games of 2009, Aromashodu had 22 receptions for 282 yards and four TD's, becoming Cutler's go to target.  He lacks the speed of Hester and Knox, but because of his size (6'2) and athleticism he is a tremendous red zone target. Could he be the guy for Cutler this season?

I am not completely sold on the idea of Aromashodu as an elite receiver for the upcoming season, but I do like him to lead the Bears receivers in touchdowns. He and Cutler seemed to be clicking at the end of the season, but I don't think those good four games are enough to make him a legitimate starter for week one. In standard leagues,  Aromashodu should be looked upon as a fill-in for your elite receivers when they have a bye week. 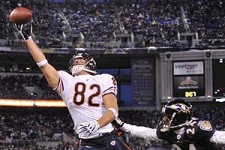 Last season Greg Olsen emerged as one of Cutler's favorite targets, totaling 612 receiving yards and 8 touchdowns, on a spastic Bears offense. What made Olsen a weekly play was that inside the 10 yard line, he led the league with 17 targets. Even after posting the best numbers of his career, though, many believe Olsen will have a down year because of the addition of Martz, who is not exactly tight end friendly. With Martz's reputation for using high tight ends as blockers, where exactly does Olsen fit in the Bears passing game?

The addition of Martz scares me a little bit, but the lack of faith I have in the Bears receivers makes me think Olsen should be just fine. To me Olsen is in the 10-12 range of tight ends so he is a low end number one who can be grabbed towards the end of drafts. With such skepticism towards Olsen, I am starting to like him more and more as a value pick. I imagine a slight slip in numbers but nothing crazy with the new offensive system. Olsen is the receiver Cutler trusts the most making him the best option for touchdowns in the passing game. 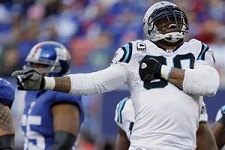 The Bears defense has been known for being the heart of the team, but it took a big hit in 2009 when Brian Urlacher dislocated his wrist in the first quarter of last season's opener. For 2010, there has to be optimism surrounding the team's defense with Urlacher back and the signing of Julius Peppers. A healthy Urlacher in combination with Peppers essentially gives the Bears two pro bowl caliber players. Peppers should help improve the pass rush, along with rookie Corey Wootton, a defensive end who should get plenty of one on one coverage with Peppers on the other side.

While the Bears secondary doesn't have many big names, it ranked 13th in the league in passing yards per game, so with the additional help up front you can expect an even better season. The Bears are a low end defense coming into the season, while being best used in a platoon since they face the high powered offenses of the Vikings and Packers twice.

We don't criticize teams as a whole in terms of fantasy, but drafting Chicago Bears players last season was apparently asking for a last place finish. No one was consistent from any one position, and the sure bets Jay Cutler and Matt Forte both fell off from their stellar 2008 seasons. Opinions differ as to whether they will rebound, but overall, I am not too high on any of the Bears in terms of fantasy this season. The lone exceptions are Cutler and the Bears Defense. The offensive line is still such a mess, so my optimism on Cutler is based only on the fact the Bears are going to be throwing the ball a ton. The running game is also flawed because of the lack of offensive line, and the receivers have yet to prove to be number two's, let alone starters in your fantasy lineup. While 2010 will likely be better than last year, my advice would generally be to stay away from the Bears for fantasy, just like you should have in 2009.