The Cubs have selected right handed pitcher Hayden Simpson with their first round pick, No. 16 overall. 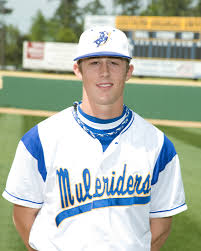 Hayden Simpson is a hard-throwing small-college right-handed starting pitcher from Southern Arkansas. Simpson originally came to Southern Arkansas from Magnolia High School in Magnolia, Arkansas, a small southwestern Arkansas town near the borders of Oklahoma and Texas. He was a fairly unknown prospect coming out of high school due to his smaller frame, and he wasn’t carrying the type of stuff he has today.

He went undrafted in the 2007 draft, heading to pitch at Southern Arkansas. After a pair of decent years, he really took a big step forward this spring, showing advanced stuff and pitchability, as well as successful numbers of a good Division 2 team. Scouts think he has the natural stuff to be a number three starter or setup man, but a few scouts can’t get past his size, which is generously listed at six feet. He’s still skinny and short, but he has enough raw stuff to influence a game.

His fastball is a plus pitch, sitting 92-94, touching 96, and that’s not just in short bursts. He holds his velocity fairly well throughout games, and he’s able to reach back for something more late in a game. He also throws in an above-average curveball with some good velocity behind it, as well as a fringe-average changeup, so the biggest concern behind his size is his ability to get pro left-handed hitters out, though Simpson has  shown enough in college to think he can handle them just fine. He’s expected to be picked in the fourth to seventh round range, where he should be signable for slot or average money.

Baseball America says that the selection of Simpson at 17th overall is the biggest shock of the 2010 MLB draft thus far:

We were on Hayden Simpson in the preseason. But no one was on him at No. 17 overall.

Simpson, our No. 191 prospect on our Top 200, was our preseason Division II pitcher of the year, and he was the pitcher of the year at Division II. But Simpson is a big surprise as a 6-foot, 170-pound righthander whose velocity parks at 92-94 mph, and he lost just two games in three seasons.

Still, many scouts had Simpson in as a middle reliever. We knew this was a volatile first round, but we didn't think Simpson could go No. 17 overall. This is reminiscent of the Cubs' 2006 first-rounder in Tyler Colvin. Colvin was toward the back of the top 200 that year as well, and he's in the big leagues now. More to come on Simpson.