Over the Memorial Day weekend, the Northwestern Wildcats fell to the Maryland Terps in the NCAA Women's Lacrosse Championship Game. Despite the loss, the 'Cats championship run remains one of the most surprising and unheralded in all of college sports. Earlier this year, we took a look at this remarkable team.

Share All sharing options for: Northwestern Women's Lacrosse: Inside An Unlikely Dynasty

For more on Northwestern University sports, please visit Sippin' On Purple and The Rivalry, Esq.

Women's lacrosse has existed at Northwestern University in some form since 1982, when it was founded as a varsity sport. The program was good but not great in its first 10 years, with the Wildcats appearing in the post season five times, though never passing beyond the quarterfinals. From 1993-2002 the program entered a wilderness, losing its varsity status and existing only in club sport form.

Northwestern revived the program as a varsity sport in 2002 under the stewardship of head coach Kelly Amonte Hiller. The team's performance improved steadily over three years, culminating in the Wildcats' first undefeated season (at 21-0) and National Championship in 2005, at which point they became the first team outside of the Eastern time zone to win a national title. Since then, the ‘Cats have run the table in the regular season twice, won four more championships, and have a combined record of 106-3 (no, that's not a typo). Despite humble beginnings, in under a decade, Hiller has managed to turn this formerly defunct program outside of the traditional lacrosse region into a championship force to be reckoned with.

The Wildcats play in the American Lacrosse Conference (unfortunately, we seem to be a bit of a ways from having an all Big Ten women's lacrosse conference) alongside Johns Hopkins University, Penn State, Ohio State, the University of Florida, and Vanderbilt University. Northwestern is the dominating power in the conference, having won the ALC championship title seven years in a row, most recently over Vanderbilt in 2010.

The ‘Cats headed into the 2010 NCAA final match ranked No. 2 in the nation. Their near perfect record this year (only one loss, to North Carolina in the regular season) is impressive considering that coming into the season they were down several impact players from 2009. Their losses included All-Americans Hannah Nielsen (attack), Hilary Bowen (attack), and Morgan Lathrop (keeper). In addition to being an All-American, Nielsen was also the all-time NCAA assists leader and was a two time winner of the Teewaraton Trophy, which recognizes the best women's collegiate lacrosse player among all three divisions of play. In spite of these losses and the heavy underclassman slant of the current squad, the Wildcats have proven a formidable force this season, and their dominance of the LAX world does not look likely to cease any time soon.

While the 2010 season has drawn to a close, Northwestern fans in the Chicago area can catch future home games of the Women's lacrosse team at Lakeside Field  Tickets can be purchased at the field on game day, or bought as part of a season long package at the official Northwestern Athletics website.

Beyond the grass, the Northwestern Women's Lacrosse team has a special purpose. The team's connection with and support of 10-year-old pediatric brain cancer patient named Jaclyn Murphy in 2005 led to the creation of the Friends of Jaclyn charity by Jaclyn's father, Denis Murphy. The charity works to have pediatric brain tumor patients "adopted" by local college and high school sports teams to foster supportive bonds for the patients. Jaclyn has said that the messages of support sent to her by the Northwestern team helped her get through her cancer treatments. Jaclyn is now a healthy 15-year-old and the charity bearing her name has matched over 100 pediatric brain tumor patients with sports teams across the country.

For more information on the Friends of Jaclyn charity, including how to donate, please visit: 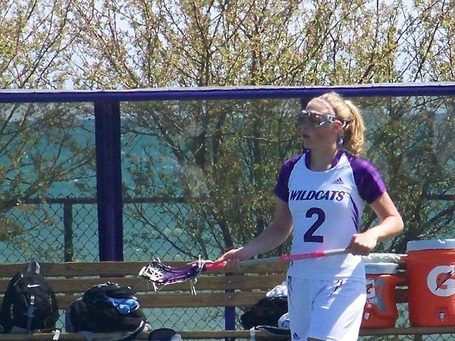 Earlier this season, I took in a game at Lakeside Field. Danielle Spencer, a senior on the squad, was kind enough to speak with me about all things Northwestern lacrosse.

Hilary: Lacrosse is traditionally known as an east coast sport. While Chicago is often regarded as a very sports-centric city at both the professional and collegiate level, lacrosse is not really big here. Coming from New York, do you find any significant difference in playing lacrosse here in the Midwest, or has the program's success eliminated that?

Danielle: I have not seen too much of a difference, mostly because all of the teams we play and many of my teammates are from the east coast. Our coaching staff has really made an effort to recruit girls from all over the country though, so each year our team gets more geographically diverse and our style has moved somewhat away from the east coast style.

Hilary: Since your freshman season in 2007, Northwestern has been both the defending ALC and NCAA champion. Has the incredible and perennial success of the program put more pressure on your shoulders as a player to repeat, or has it given you confidence that the squad can overcome anything in its way?

Danielle: I think that because of our past successes people put a lot more pressure on us, but it is something that we try not think about. Obviously our main goal is to win a national championship, but we focus on taking each day one at a time, one practice at a time, and we try to never think about our past success. As soon as you start thinking about the past, another team is right behind you ready to bring you down.

Where we get our confidence from is the practice setting, not through our games. We try to have our own teammates be our toughest competitors, so we like to think that the harder we work in practice and the success that we have there will transfer over to the games. Our goal is that every time we step onto the game field, we will have complete confidence because we will know that nothing that game will be more mentally or physically challenging than what we have already endured in practice.

Hilary: The team lost quite a few strong players after last season, including the all-time NCAA assists leader, Hannah Nielsen. The team seems to be very young in general, with underclassmen now looking to start at attack, midfield, and keeper. In football, it's often the case that it's difficult to predict the season performance of a young squad, as they usually haven't yet developed good team chemistry. Do you think the youth of the lacrosse team this year is an asset or hurdle for the program in its title defense?

Danielle: I think that our youth is an asset. Our freshman and other less experienced players bring a new energy and level of competitiveness to practice every day, and it keeps things fun and exciting. Also, because of our youth, everyone is competing for starting positions daily, so it keeps the practice setting intense.

We never try to think of our youth as a hurdle; we feel that anytime we make an excuse that "we are young, so it is OK that we made X,Y, Z mistakes" that we are doing just that-making excuses. We have high expectations for our younger players and expect that every time they walk onto the field they will act and play like they are experienced leaders.

Hilary: Off the field, the Northwestern women's lacrosse team is part of quite a special charitable endeavor. Can you say a few words about what it means to the members of the team to be involved with the Friends of Jaclyn organization?

Danielle: To me and my teammates, being a part of Friends of Jaclyn means being a part of something other than yourself. Friends of Jaclyn has taught us that anytime you think you are struggling with something difficult, anytime that you complain about something, there is always someone going through something worse than you. All it takes is spending time with a child that has a brain tumor or is a pediatric brain tumor survivor to learn that many of the things we complain about and stress over are very petty, and that we should appreciate every moment and opportunity that we are given because not everyone is guaranteed those opportunities. 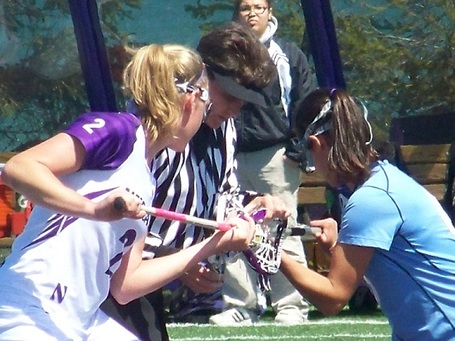 Hilary: The Northwestern lacrosse program has been quite strong for the last five years. As you prepare to depart the team at the end of this season, where do you see the future of the program heading? Do you think the squad can match or beat Maryland's streak of seven consecutive NCAA championships?

Danielle: I absolutely think that Northwestern can be the team to break Maryland's record, but it is a long ways away. With the knowledge, experience, and innovation of our coaching staff along with the type of player that they recruit, I think we have a lot of potential to break the record, but what it comes down to in the end is hard work and who wants it most; our younger players have the potential to make it happen but it's up to them to make it a reality. I will no longer be playing at that point so there is nothing I can do but cheer from the sidlelines!

Hilary: Unlike the other sports that we cover, lacrosse is similar to most NCAA sports in that it has no real professional analog. As you prepare to (pardon the cheesy quote), "become one of the thousands of student-athletes that go pro in something other than sports," what are your plans for after college? Are you going to continue to be involved in the lacrosse world in any way?

Danielle: I am still unsure of my career plans, but I do know that I will stay involved in lacrosse in some way. In terms of playing, I have plans to try out for the US National Team this summer, and it is a goal of mine to make that squad. Coaching lacrosse is another passion of mine, and I would love to continue coaching in some way regardless of my career path.

Hilary:  As a fan of Northwestern football, I am obligated to include a football question. A few short months ago, Northwestern lost in heartbreaking fashion to the Auburn Tigers in the Outback Bowl, extending our bowl drought to 61 years. Do you think the Wildcats finally snap that streak and win a bowl game in the upcoming decade?

Danielle: I absolutely think that our football team will win a bowl game not just in the next decade but in the next couple of years. I am friends with a lot of guys on the team, and I know that they are working very hard and really want a bowl game win; they have some bowl experience now under their belt so hopefully they can make it happen next year. I will be rooting for them!

Hilary: Finally, I (and the rest of the writers) would like to thank you for being so willing to answer these questions. Is there anything you'd like to say to our readers?

Danielle: An interesting fact about me is that I am one of four girls from Brighton High School (Rochester, NY) who either has or will play Northwestern Lacrosse. Hilary Bowen started the trend in 2005, and then I followed the year after her. Then Beatrice Conley joined our team this year, and just recently a junior from my high school, Mikaela Bozza, has just committed as well and will be a freshman in two years.  We are very proud to have created this Brighton-Northwestern connection and hopefully it will continue with even more Brighton grads in the future!